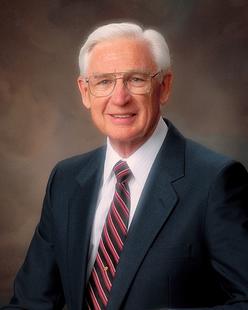 The Early Years
As a young man, Elder Rudd served as a missionary for the LDS Church in New Zealand, where he served under President Matthew Cowley. After he returned from his mission he married Marva Sperry. LDS Church apostle Elder Harold B. Lee, who had been Rudd’s stake president when he was a child, performed the marriage.

During the early years of his marriage, Elder Rudd served as a ward clerk, a counselor in the bishopric, and a bishop. As a young deacon, he remembers contemplating a lifetime of church service. “I had an idea that someday I would be a bishop—when I got to be fifty,” he says. “But that responsibility came earlier than anticipated—by the time I was halfway to fifty.”

The Call to Serve
Elder Rudd managed his own business for the first twelve years of his professional career, until one day when Elder Harold B. Lee asked him if he would manage Welfare Square. “He made me a promise,” says Elder Rudd. “He said, ‘If you’ll come and be the manager of Welfare Square, you’ll never regret it.’ That was one of the great promises of my life—I have never regretted it.”

Elder Rudd took the job the next day and gave up his business. He traveled throughout the Church with General Authorities teaching in stake conferences about the welfare program. He gained a great testimony of the principle of work. “All my life, when I’ve found people in trouble, people who are sad, people who need counseling or advice, I have found that work is generally the answer to their problems,” he says.

A Legacy of Giving
For more than thirty years, Elder Rudd worked in the development of the welfare program. His first assignment was to help work out details of how storehouses should be run. Later, he helped design, build, and establish storehouses in many parts of the United States.

In all his Church assignments—welfare work, temple work, and missionary work, Elder Rudd has felt the Spirit of the Lord. “I just know the Church is true,” he says. “There has never been a time when I haven’t known it was true. The testimony I have comes from the whisperings of the Spirit. If we can listen to the Spirit of the Lord, we can know the direction to go.”

Make a difference in the lives of Polynesian youth by giving them the best possible chance at a better life through access to education through scholarships. Your generous contributions help make it possible to help many Polynesian youth in need.

Make a difference in the lives of Polynesian youth by giving them the best possible chance at a better life through access to education through scholarships.